Professor Kari Marie Norgaard‘s expertise on climate change denial and emotional management was cited in an article on Grist last week. Below is a short excerpt of the article:

“Getting used to things is just what humans do. It’s what has allowed most of us to get through the constant upheavals and wild news of 2020. But for severe, global problems, psychic numbing can have dangerous implications. It could mean that we ignore the roughly 250,000 people estimated to die annually of climate change-related causes by 2030; or that, in the age of COVID-19, people start to forget about the pandemic, flout social distancing rules, and spread the disease…

…But even though the Norwegians knew about global warming, Norgaard argued that they lived in a kind of “double reality,” both accepting — and almost completely ignoring — the melting ice caps and disappearing snow. They spent their days, she wrote, “thinking about more local, manageable topics.”

The full article is available for free on https://grist.org.

Congratulations to Professors Raoul Liévanos and Kemi Balogun for their recent UO awards for excellence in teaching and research!

Dr. Liévanos was selected as a recipient of the Excellence in Remote Teaching Award for Spring 2020. This award recognizes and rewards innovation and creativity under such challenging circumstances to those who implemented positive learning experiences using the remote format. Dr. Liévanos stood out for his innovations, care, and responsiveness to students during a term where everyone was working hard under immense pressures. His advocacy for underrepresented students and the way he managed classroom communications were equally exceptional.

Dr. Balogun was selected as a recipient of the 20-21 Fund for Faculty Excellence award. This prized UO award recognizes and rewards nationally competitive faculty who have a record of distinction in their quality of scholarship and creative accomplishment, contribution to their respective field, and contribution to the university, and provides top faculty members with salary supplements or research support to recognize world-class research. Dr. Balogun’s her recent work includes the publication of her book Beauty Diplomacy: Embodying an Emerging Nation (Stanford University Press, 2020), and a co-edited a volume (with Lisa Gilman, Melissa Graboyes, and Habib Idrissu) titled Africa Every Day: Fun, Leisure, and Expressive Culture on the Continent (Ohio University Press, 2019).

Our department could not be more proud of our excellent faculty and all of their many contributions to sociology and to society. Congratulations again to both Professors Liévanos and Balogun for their achievements! Just 18 months ago, UO Sociology Professor John Bellamy Foster was rightly honored with the UO Outstanding Career Award. This latest honor, the Isaac and Tamara Deutscher Memorial Prize, is global in scope and puts Dr. Foster and his work alongside the company of a very small number of intellectuals worldwide.

This award is a cherished honor for anyone whose scholarship engages the interdisciplinary and rich domains of Marxism. The list of past recipients includes notable geographers, cultural theorists, historians, economists, sociologists, and more. The prize is further testimony to the genius and hard work of our colleague, John Bellamy Foster.

The Return of Nature (2020, Monthly Review Press) is an epic genealogy of ecological and socialist thought, charting an historical dialectic that unearths the scientific and aesthetic trajectories of ecosocialism. Over nearly 700 pages, Dr. Foster uncovers a long history of efforts to unite issues of social justice and environmental sustainability that will help us comprehend and counter today’s unprecedented planetary emergencies.

Dr. Foster describes the legacy of the award and its role in UO Sociology as follows:

The Deutscher Prize has been a beacon for me ever since the early 1970s, when I first read Istvan Mészáros’s Marx’s Theory of Alienation, which was the 1970 winner. Mészáros later became a close friend. The very first prize, though, was given in 1969 to Martin Nicolaus for his The Unknown Karl Marx associated with his translation of Marx’s Grundrisse, which was published soon after.
Interestingly, it was Nicolaus, chosen by the left caucus, who gave the big lecture that same year, in May 1969, to the ASA, marking the coming to be of critical sociology and end of the hegemony of functionalist sociology, which had dominated in the post-Second World War years. Some of those who were later to become UO faculty played key roles in those events, which also marked the birth that same year of The Insurgent Sociologist (now Critical Sociology) long housed in our department. Ever since, with lots of ups and down, UO Sociology has retained its reputation as a bastion for critical sociologies.
For me, therefore, this prize is tied up with a whole history that has made the discipline what it is today, in which our department over the years has played a crucial role. And of course, the Deutscher Memorial Prize, as the premier international prize associated with Marxian thought today, symbolizes our department’s long contribution to this area especially, encompassing the contributions of numerous important scholars who have walked our halls.

Please join us in congratulating Dr. Foster on this most recent academic and professional accomplishment, and for his extraordinary contributions to sociology and to our department! In solidarity with Black communities within and beyond the United States, as well as with various academic communities and the American Sociological Association, we emphatically assert that Black lives matter.

We recognize the dignity and humanity of every Black person. We mourn the murder of all black people, notably Ahmaud Arbery, Breonna Taylor, and George Floyd but also countless others.

We condemn police brutality and racism that reflect the anti-Blackness pervasive throughout the world. We lend our voices to the chorus of people who have protested in the streets around the world in support of Black lives and racial justice, following the acquittal of Trayvon Martin’s killer in 2013 and George Floyd’s murder on May 25, 2020.

We demand action at every level of government to hold accountable every police officer who violates the law and the rights of others. In particular, we call for robust federal assistance to convince and enable local and state governments to restructure police union contracts and to hold the police accountable to the individuals and communities that they serve.

As sociologists, we recognize that the anti-Blackness associated with police brutality is part of a systemic racism that is rooted in the United States’ original sins of slavery and settler colonialism. This complex of attitudinal, cultural, and structural racism has been renewed in many forms throughout the nation’s history. This includes the racial disparities in COVID-19 illnesses and deaths; the ongoing dispossession and erasure of Indigenous lands and peoples; the increase in anti-Asian hate crimes resulting from efforts to blame China for COVID-19; and recent immigration policies that target Latinx individuals and communities, separate children from their parents, bar refugees from entering the country, and inflict unnecessary suffering upon countless migrants.

As a department, we understand the recent protests across the nation as a reflection of the pain, anger, and profound injustice stemming from centuries of white supremacist violence and oppression that is systemically organized through economic, political, and social institutions. We recognize that making the university more inclusive for communities of color is a responsibility that should not fall solely or even primarily on the shoulders of students, faculty, and staff of color who already experience the heavy weight of racial inequities and hostilities in our community and at the university.

Accordingly, we rededicate ourselves to rooting out anti-Blackness and racism in our own midst, whether it is found in our canon, our syllabi, our admissions committees, our hiring committees, our advising and mentoring, our institutional and professional service, or our citation and co-authorship patterns. Furthermore, we pledge to identify specific actions that push beyond self-education, diversity training, and campus programming and toward advocating for antiracist policies and structural changes at the University of Oregon and the State of Oregon.

A new piece on the independent news site The Conversation by UO Sociology alumna Dr. Autumn Greene, discusses the scarcity of student housing for students with children while highlighting the efforts UO and other US universities have made to create community for this population.

Dr. Greene is working on a number of projects relating to access and equity in higher education. As a research scientist at Wellesley College, Dr. Greene has shown how policies make significant differences for students who also juggle parenting.

Dr. Greene is now co-leading the Oregon Student Parent Success Coalition, which is a group of statewide and national experts who are working to help move an initiative and legislative bill forward that would initiate data collection on parenting status for all Oregon public university students. You can read the report brief on the LERC website, here.

Congratulations are in order for Professors Kemi Balogun and Raoul Liévanos! We are delighted that these two outstanding professors now join the ranks of tenured faculty at the UO. As the west coast continues to endure an extremely destructive fire season, UO Sociology alumnus Dr. Tim Ingalsbee, environmental sociologist, executive director of Firefighters United for Safety, Ethics & Ecology (FUSEE), and former wildfire-fighter has been quoted in multiple media sources, sharing his perspective on forestry & wildfire management and the coverage of these events. You can see more about his work on the Willamette Week, ProPublica, and OPB websites (Dr. Ingalsbee is featured in episodes 1 & 6 of the OPB podcast series).

UO Sociology Alumnus featured in Around the O newsletter This week, Around the O’s email newsletter includes a UO Sociology alumnus!

Adam Markle (BA ’03) is an Emmy-winning cinematographer and documentary filmmaker whose latest film, 34 Seconds, is due to premiere this fall. He talked to Around the O about the importance of his background in sociology to his career today:

“My sociology courses taught me to look at the world from different perspectives and ask critical questions. What I learned at the university shaped the kind of stories I wanted to tell—and how I wanted to tell them.

“I produced a documentary about migrant farm workers in Southern Oregon, and I chose to make it 80 percent of my grade. I ended up spending 15 hours a day in the editing room—and realized I was enjoying it.”

Read the full story on Around the O’s website. 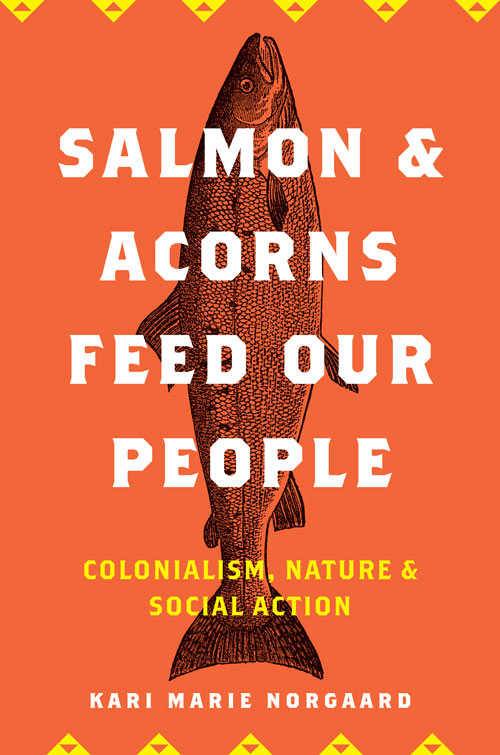 Dr. Kari Marie Norgaard, professor of Sociology and Environmental Studies, was recognized as a finalist for the C. Wright Mills Award by the Society for the Study of Social Problems (SSSP) for her recent book Salmon and Acorns Feed Our People: Colonialism, Nature, and Social Action (2019, Rutgers University Press).

The C. Wright Mills Award, established in 1964, is awarded annually by SSSP. Consistent with Mills’ dedication to a search for a sophisticated understanding of the individual and society, books nominated and selected as finalists: 1) critically address an issue of contemporary public importance, 2) bring to the topic a fresh, imaginative perspective, 3) advance social scientific understanding of the topic, 4) display a theoretically informed view and empirical orientation, 5) evince quality in style of writing, 6) explicitly or implicitly contain implications for courses of action.

Congratulations to Dr. Norgaard for this recognition of her powerful and critical work!