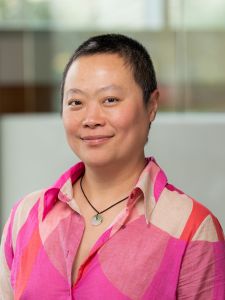 Haisu (pronounced “Hi Sue!”) is a PhD student in the Department of Sociology at the University of Oregon.

a. Finalizing her research on coal miners’ perceptions of air pollution in China. This project reveals that mining authorities impose great power over the work lives of the miners and that such power cumulatively creates the acquiescence among workers about issues at work and outside work. Even though workers may recognize that their own health suffers from pollution, the fact that they lack an effective channel to have their voices heard at work solidifies their belief that they have no say in outdoor air pollution issues. Instead, workers report “We have nothing” as a common solution to the problems with the air pollution. Such avoidance, she asserts, is rooted in their lived experience working in the dominating Chinese coal industry.

b. Co-Researching risk management of low wage workers in China during the COVID-19 pandemic, using Walmart as a case study, with Dr. Eileen Otis. This project won the 2020 Marquina Faculty-Graduate Student Collaboration Award by the Department of Sociology.

Creatively, Haisu debuted her short documentary film “A Post-Tiananmen Story” in the 2020 Latino Roots Celebration at the University of Oregon. The film is about a Chinese immigrant who witnessed the government crackdown of the 1989 Tiananmen Square pro-democracy protest. At the time of the protest, the main subject of the documentary was a Journalism graduate student who placed herself in harm’s way to assist in reporting the incident to the world. Following the crackdown, she moved to the United States, dedicating herself to remembering the Tiananmen incident despite relentless censorship by the Chinese government. The film shows via its mini story of a Chinese journalist how people live their lives after surviving a massacre.  Haisu wrote and directed the film under the guidance of Dr. Lynn Stephen, Department of Anthropology, and Dr. Gabriela Martinez, School of Journalism and Communication. Haisu is including filmmaking as a research method in her dissertation.

When Haisu is not engaged in research, she practices women’s empowerment self-defense (ESD). Her goal of becoming an ESD training instructor will propel her to help community women defend themselves physically and verbally against sexual assaults.

Haisu is a Dreamers Ally. Her pronouns are She/Her/Hers.